Start a Wiki
The Stadium is a location in the neighborhood where the Race mini-games are found. Your pet can practice racing, race for money, or bet on other pet races. You can earn several trophies by participating in these mini-games.

The Stadium was introduced to Pet Society in September 2008. Like the Cafe, it was first show as "in construction" before finally opening. It is the first place in the Neighborhood that was not a store (before Pond or the Treasure Hunt was released) and one of the few places without an owner.

"Despite pets not being eminently athletic types, the stadium is nonetheless a popular venue for pets young and old to meet, race, cheer on their friends and slip over on unfortunately placed banana skins. Even the Mayor has been known to enter himself for occasional hurdle races, although his track record is poor."

Stadium was changed November 18, 2010. Thanksgiving.
Add a photo to this gallery

There are four things you can do at the Stadium:

Whenever a race is in progress, the stadium bleachers will be full of other pets watching the race. If you have 12 friends or less, the pets at the stadium will be generated randomly by the game. This is why some of these pets will be wearing clothes that are no longer in stores.

During the Happy Thanksgiving Week, appearances of the other 2 pet competitors are changed into turkeys. 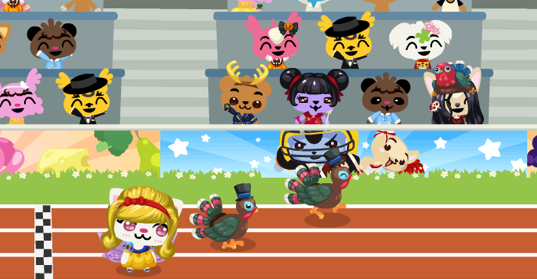 Retrieved from "https://petpedia.fandom.com/wiki/Stadium?oldid=37414"
Community content is available under CC-BY-SA unless otherwise noted.