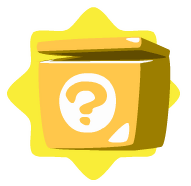 The Expensive Mystery Box (also called the Gold Mystery Box, Yellow Mystery Box or abbreviated as GMB in the Playfish forums and some say it YMB) is the high-range priced Mystery Box found at the Mystery Shop. It contains a random object that may or may not be found in stores. Some objects will be worth more than the cost of the box (either in resale, or when trading in the forums), while others will be worth a lot less.

Items in mystery boxes are constantly changing, as Playfish adds and remove objects often once a week. Playfish staff will sometimes give advance warning on what objects they are removing, but not always - this can be a problem for many Pet Society users who are trying to get certain objects. Playfish also will often announce on the blog some of the new items they are adding to the mystery boxes.

Since this is the expensive of all mystery boxes, it adds new items every week.

A running list of items that once were in mystery boxes, but no longer are available in stores or in boxes, can be found at Category:Old Mystery Box Item.

There are currently 62 items in the Expensive Mystery Box - below is an incomplete listing. The pictures are arranged as they appear in the Mystery Box Panel. This list was last updated March 31, 2012.

Triple Sconce with Skull Base

Day of the Dead Boy Portrait

Day of the Dead Bride Plushie

History and Use of Mystery Box

New players may find it confusing how to "use" this item. After buying the mystery box at the Mystery Shop (or from the Mystery Panel), you will need to go home and open the Mystery Box panel using the box button in the right center of the home screen. Choose the type of box you want to open and click on it. Your random object will then be revealed and the mystery box will disappear from your inventory. You can open lots of boxes quickly this way.

Items from mystery boxes, particularly Gold Mystery Boxes (GMBs), are often used as "currency" when Trading in the Playfish forum. Mystery boxes are also a good source of 999 items, so named for their resale value in-game.

Community content is available under CC-BY-SA unless otherwise noted.
Advertisement