The Bank is a store where you could buy coins to spend in the other shops via Paypal. At first only coins were sold at the bank, but after the introduction of the Playfish Cash and the Boutique, both types of currency were sold here. In addition to buying currency, there were lists of offers which could be completed to earn free coins or playfish cash (blue coins).

This store was removed from the Neighborhood Page on the 5th March 2010. For a while it was still accessible by going to the "Add Coins" button at home. However, this link was removed several months later and the Add Coins button now leads to a dialogue box to buy coins instead.

Interior of the Bank 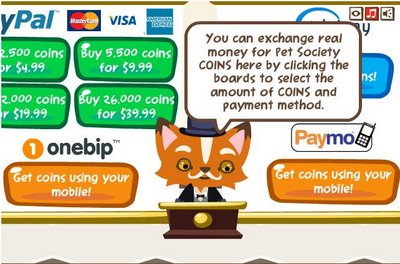 Image of the bank interior is from this blog.

Retrieved from "https://petpedia.fandom.com/wiki/Bank?oldid=12928"
Community content is available under CC-BY-SA unless otherwise noted.